Stavros MarkosumSManalysis - vor 1 Tag
Boxing between MP of the Albanian Parliament *The Prosecutor General declared that they have started investigations against three Albanian MPs, Arben Ndoka and Pjerin Ndreu from the Socialist Party, who are accused of attacking the Democratic MP, Gent Strazimiri from the Democratic Party. The third MP under investigation is Astrit Veliaj, from the DP. *   PD: Deputeti Arben Ndoka, i dënuar në Itali për shfrytëzim prostitucioni

Exile in Brooklyn, With an Eye on Georgia

AT the Smorgasburg food fair in Williamsburg, Brooklyn, Mikheil Saakashvili motored in fluorescent green sneakers among bearded men with tattoos and women in revealing overalls. They lined up for Cheese Pops, Dun-Well Doughnuts and other local delicacies. He ordered a fresh coconut.
“My friend, one of the biggest sheikhs of the United Arab Emirates, gave Georgia 20,000 palm trees,” Mr. Saakashvili, the former president of Georgia, said as he dropped a straw in the machete-opened fruit and emptied its water with a few deep pulls. “As a personal gift.”
Mr. Saakashvili is in self-imposed exile on North Seventh Street — plotting a triumphant return, even as his steep fall from grace serves as a cautionary tale to the many American government officials who had hoped he would be a model exporter of democracy to former Soviet republics.
Continue reading the main story
Since leaving office last November, this George W. Bush favorite — whose confrontation with President Vladimir V. Putin of Russia led to a disastrous war in 2008 — has commandeered his uncle’s apartment in a tower on the Williamsburg waterfront, where he luxuriates in the neighborhood’s time-honored tradition of mysteriously sourced wealth. When not lingering in cafes, riding his bike across the bridge or spending stag evenings with friends on the Wythe Hotel rooftop, Mr. Saakashvili seizes on the Ukrainian conflict and his experience with Mr. Putin’s wrath as a lifeline back to political relevance.
“It’s the end of Putin,” Mr. Saakashvili, 46, said of Russia’s aggression in Ukraine, the topic of discussion on Thursday as its president, Petro O. Poroshenko, met in Washington with President Obama and congressional leaders. Mr. Saakashvili called Mr. Putin’s actions “very, very similar” to those in Georgia. “I think he walked into trap.”
BUT Mr. Saakashvili, considerably plumper than when he was in power, argues that the conflict should also mark a reappraisal of his own reputation as a reckless leader whose peaceful Rose Revolution and commitment to reform were eclipsed by years of riding roughshod over opponents, bending the rule of law and provoking Mr. Putin into a war that resulted in the death, displacement and impoverishment of thousands of Georgians. “It should be revisited,” he said.
Mr. Saakashvili said that while he had a “normal life” in Brooklyn, he considered himself a big deal in Eastern Europe, pointing out that on a recent trip to Albania “they shut down traffic for us and our 20-car escort.”
Mr. Saakashvili’s personal rehabilitation project is complicated by his eroded popularity back home and charges filed against him by Georgian prosecutors of human rights violations and embezzlement of government funds. He shrugs off the prosecutors as politically motivated puppets of his nemesis, the billionaire and former Prime Minister Bidzina Ivanishvili. Some of Mr. Saakashvili’s critics agree that the charges say as much about the current Georgian government’s hunger for revenge as they do about him.
Continue reading the main story
For now Mr. Saakashvili is writing a memoir, delivering “very well-paid” speeches, helping start up a Washington-based think tank and visiting old boosters like Senator John McCain and Victoria Nuland, the assistant secretary of state. He said he was in the process of changing his tourist status here to a work visa and in the meantime is enjoying the bars and cafes of his adopted homeland. On his roof deck, with sweeping views of Manhattan, he has entertained David H. Petraeus, the former director of the Central Intelligence Agency, and is expecting Nicolas Sarkozy, the former French president, at the end of the month. Usually, a cousin mans the grill, along with the chef from Fabbrica, the neighboring Italian restaurant opposite a CVS. Like those chain drugstores, glassy high-rises and Eurocentric nightclubs, Mr. Saakashvili is evidence of Williamsburg’s steady transition to a playground for moneyed out-of-towners.
“I used to look at this place from Manhattan, it was such a pity, it was mafia, a place where hit men dump bodies,” he said, recalling his time in the 1990s as a Columbia University Law School student. Now he sees “a jazzy atmosphere” rife with energy and new construction.
“Williamsburg is part of the democratic transformation,” he said.
Mr. Saakashvili tends to see a lot of things through the lens of democracy building. He calls the fashionable Cafe Mogador “my absolute favorite cafe, because it’s very democratic.” And while he complains about Williamsburg’s high cost of living (“I’m not poor poor, but it really bites”), the champion of free enterprise admires the social mobility of his new neighbors.
“They are hipsters,” he said. “But they are still making tons of money, and they live a pleasant lifestyle and make it in life. They are no longer a marginal part of society.”
On one of his first nights in Williamsburg, Mr. Saakashvili waited in line with friends to get into the Wythe, but was turned away because he did not have identification. “It’s O.K.,” he said. “It’s not a posh place like in Manhattan.”
ON a more recent weekend, the man the Secret Service once dubbed “the Energizer Bunny” charged out of the food fair and into the Artists & Fleas market, where he pulled Prada sunglasses from his graying sideburns and went straight to a booth selling clocks made from retro hardcover books. “I bought 50 of them and sent them back to my presidential library,” he said. Five months before, he said, a woman spotted Leonardo DiCaprio here.
Moments later, a Georgian living in Manhattan, Lali Lobzhanidze, approached him and asked, “Are you Mikheil Saakashvili?”
“My DiCaprio moment,” he said, delighted.
Mr. Saakashvili is frequently noticed by his countrymen, whose opinions of him vary. “He’s creating rifts in the diaspora,” said Vakhtang Gomelauri, a critic of Mr. Saakashvili who organized a 2012 protest of him at the United Nations after the revelation of rampant rapes of inmates in Georgian prisons. But a group of Georgian students was eager to pose with him on the Bedford Avenue subway platform. “It went viral,” Mr. Saakashvili said.

The former president usually takes the L train into Manhattan, where he frequents Oda House in the East Village (the owner likes him, the waiter does not) and Pepela, where he orders a 2004 vintage of the dry red Georgian wine Orovela Saperavi and he recently lunched with Bill Clinton.
Eingestellt von navy um 02:36 Keine Kommentare: Links zu diesem Post

The Kosovo Police arrested the Imam of the Big Mosque in Prishtina, Shefqet Krasiqi; the Imam of the Mitrovica Mosque, Enis Rama; the Imam from Peja, Enes Goga; the politician and one of the Islamic Movement leaders in Kosovo, Fuad Ramiqi, and 11 other imams and activists.

Albania to seek EU support for infrastructure investments Sep 17,2014 TIRANA, Sept. 17 (Xinhua) -- Albanian Minister of Transport and Infrastructure Edmond Haxhinasto on Wednesday emphasized the need to seek investment support for its corridor VIII scheme during a meeting of EU Council of Transport Ministers in Milan. According to the Albanian Telegraphic Agency, the corridor includes road connections with Macedonia, capacity enhancement at Albanian ports and railways. During meetings with his German and Montenegrin counterparts, Haxhinasto said support for Blue Corridor linking We... mehr » 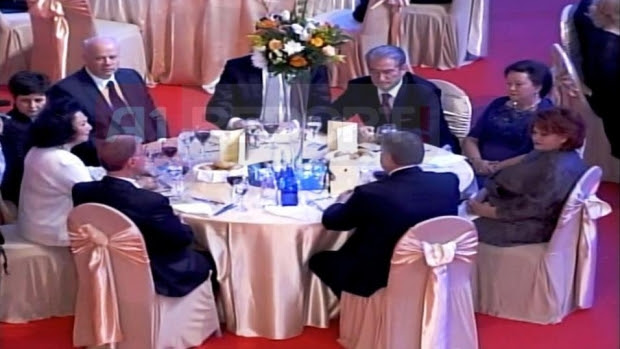