Italy on Alert Over Jihadist Threat From Balkans

Italian authorities are increasingly concerned by the number of radicalized Muslims emigrants from the Balkans joining the ranks of the Islamist militants.
Aleksandra Bogdani
BIRN
Tirana In a video released on February 15, after the murder of 21 Egyptian Christians in Lybia, a masked militant from the Islamic State of Syria and al-Sham, ISIS, points toward the Italian shore and warns: “We will conquer Rome by the will of Allah.”
Bloodcurdling ISIS threats to the West are nothing new. But, documents from the Italian security agencies, seen by BIRN, show Rome is increasingly worried by the threat of terrorists coming from the Balkans as well as from North Africa and the Middle East.
According to one document seen by BIRN, the Italian Interior Ministry has identified five radical cells from the Balkans operating in Italy and recruiting jihadist fighters for the Islamic State.
The cells are located in Milan, Rome, Liguria, Lucca and Siena, infiltrated into communities of Muslim emigrants from Albania, Kosovo, Macedonia and Bosnia
So far, eight of the 59 people that Italian security agencies have identified as joining radical Islamic groups fighting in Syria and Iraq come from the Balkans. Four have already died in the Syrian war.
Because of its geographical proximity, Italian authorities are worried that ties between radical preachers coming from the Balkans and local Muslim communities could turn the country into a centre of radical Islamist activity.
Since the civil war started in Syria, several hundred Muslims from the Balkans have joined militant organizations like the al-Nusra front and ISIS.
The International Center for the Study of Radicalization, ICSR, a think tank based in King's College, London, believes the number of fighters from the Balkans that have joined jihadist groups in Syria totals 632.
Last week, two imams and seven of their supporters went on trial in Albania a year after their arrest, accused of recruiting dozens of fighters for ISIS and the al-Nusra front.
The indictment says imams Bujar Hysa and Abdurrahim Balla facilitated the recruitment of 70 fighters from Albania between 2012 and 2014 through their mosques on the outskirts of Tirana.
Since the start of the conflict, 10 Albanians have lost their lives fighting in Syria, while 30 others have already returned home and are under the constant observation of law-enforcement agencies.
In September 2014, meanwhile, the authorities in Bosnia and Herzegovina arrested a radical imam named Bilal Bosnic under an operation codenamed “Damask.”
BIRN has learned that agents from Italian anti-terror units in the cities of Bergamo and Cremona, which have large immigrant populations from the Balkans, took part in the operation.
Bosnic held inflammatory preaching tours in Italy in 2011. In an interview with the Italian daily newspaper, Corriere Della Sera, in August 2014 Bosnic declared that jihadist recruits had their eye on Italy.
“Italy is a very important country for us because we believe the whole world will become one Islamic State,” he said. “Even the Vatican will be Muslim,” Bosnic added.
Bosnic is not the only radical imam from the Balkans to have preached to Muslim immigrants in Italy. Shefqet Krasniqi, imam of the Grand Mosque in Pristina, is another.
Kosovo authorities arrested Krasniqi last September on suspicion of “incitement to hatred and religious, racial, ethnic intolerance”.
Before his detention, Krasniqi in December 2013 held a meeting with the faithful at the El Hilal mosque in the Italian town of Grosseto, in Tuscany, and a video of his sermon in the mosque can be found in YouTube....


Growing up, I gained some political knowledge of CIA atrocities from actually reading the articles my dad's Playboy mags, but I did not really begin to become politically knowledgeable or sufficiently suspicious until the evening of Sept. 11, 2001, when I read that Afghan women had been fighting for secular democracy, pleading for Western help, and warning the US about the psychotic Mujahideen for 20 years.


I took Clinton at face value on Kosovo.  I was uncurious about the history.  I never really questioned what Clinton said, but I casually wondered how American foreign policy had suddenly switched gears from forming Latin American death squads under Reagan-Bush ... to humanitarian bombing in Europe.

(Various stories abound that the Islamic Chechen rebels -- many Chenhens want an end to Russian domination, but don't like the fanatic and fascistic Al-Qaida types -- are still getting covert support by Al-CIA-da.)

I was gullible.  I was so relieved, thinking that we finally got the CIA (Bush) out of the White House, believing we were done funding death squads, we had removed the Iran-Contra conspirators (where the President and VP lied, nobody was convicted of serious crimes like treason for treachery of defying the Boland Amendment, everyone was aquitted on minor legal technicalities, or pardoned, and the criminals who sold weapons to Iran astonishingly claimed to be bold patriots),
... and so that I thought Clinton was a welcome relief, a breath of fresh air.

these are probably THE most important geopolitical articles on the whole topic:

The mid-October revelations that an Osama bin Laden terrorist training camp is operating in the U.S.-controlled zone of Kosovo, are only the tip of the iceberg. Now, in a sort of ``Operation Truth,'' Macedonian and other sources have begun to reveal publicly what until now had been known to only a relatively small group of people, about the narco-terrorist connections between the Kosovo Liberation Army (KLA) and the Taliban, and between these two groups and high-level U.S. and British intelligence agencies. Operation Truth is now affecting the strategic domain, provoking a reevaluation of the conventional way of viewing ``international terrorism.'' The path leads to those strategists who have used terrorism as a weapon of irregular warfare. ····The story of bin Laden's right-hand man, Ayman ``The Doctor'' Zawahiri, and the Balkan activities of the latter's brother, have shocked a large number of people. How is it possible that such a high-level official of the bin Laden gang is able to run a training camp for the KLA near the Kosovo village of Ropotovo, in the middle of an area controlled by the United States? How is it possible that Zawahiri's brother, as reliable sources report, was (and still reportedly is) in charge of KLA operations in the KLA-occupied area of neighboring Macedonia? How is it possible that the Zawahiri-led gang of international mercenaries could move, without any hindrance, from NATO-controlled Kosovo into Macedonia?


NOTE: NO REPUBLICAN has mentioned this in public.
Republicans doing "Path to 9-11" hit piece on Clinton did not mention this.
Only Clinton's alleged incompetence and timidity.


One week into the bombing campaign, there is widespread discussion of options for further actions. One option includes forging a closer relationship between the United States and a controversial group, the Kosovo Liberation Army (KLA), a group which has been cited in unofficial reports for alleged ties to drug cartels and Islamic terrorist organizations.

The Kosovo Liberation Army "began on the radical fringe of Kosovar Albanian politics, originally made up of diehard Marxist-Leninists (who were bankrolled in the old days by the Stalinist dictatorship next door in Albania) as well as by descendants of the fascist militias raised by the Italians in World War II"

Among the most troubling aspects of the Clinton Administration's effective alliance with the KLA are numerous reports from reputable unofficial sources -- including the highly respected Jane's publications -- that the KLA is closely involved with:

* The extensive Albanian crime network that extends throughout Europe and into North America, including allegations that a major portion of the KLA finances are derived from that network, mainly proceeds from drug trafficking; and

* Terrorist organizations motivated by the ideology of radical Islam, including assets of Iran and of the notorious Osama bin-Ladin -- who has vowed a global terrorist war against Americans and American interests.
(i can't remember where i copied this from, sorry)

According to "The Washington Times," "The Canberra Times," (Australia) "The Charleston Gazette," and numerous other publications, Osama Bin Laden and co. were directly involved in pro-American "terrorist" organizations in Bosnia, Kosovo, (KLA) and Macedonia -right up until the summer of 2001.
"But, one may protest, "this doesn't make sense. Why would the U.S. military support anti-American movements?"
The critical geo-political component to recognize here is this: de-stabilization.

Clinton-Approved Iranian Arms Transfers Help Turn Bosnia into Militant Islamic Base
TWRA is believed to be connected with such fixtures of the Islamic terror network as Sheik Omar Abdel Rahman (the convicted mastermind behind the 1993 World Trade Center bombing) and Osama Binladen, a wealthy Saudi emigre believed to bankroll numerous militant groups.
Of course I disagree with the conclusion, which says that Carter should have gone to war to kill off the evil Sandinistas.
But the central point of Clinton's "gross error" was collabortation with Al-Qaeda forces, and massive aid to Islamic Fundamentalists.....
http://www.takeoverworld.info/osamagate.html 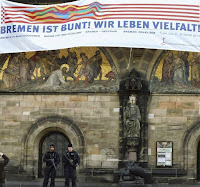