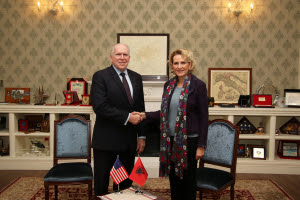 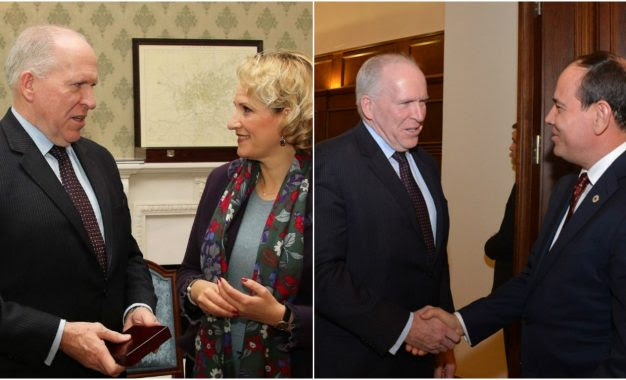 
Albania has become the largest producer of outdoor-grown cannabis in Europe. The potent plant has been described as "green gold" for struggling farmers. In a poor nation, it's a billion-euro industry.
Off a dirt road, in a small village north of Tirana, there's a half-built, tumble-down, brick house. It stands alone and looks abandoned. It isn't. The sweet, heady odour that seeps from one of the rooms reveals its current function: cannabis production. Inside, more than half the floor space is covered with buds of the drying drug.
"There's about 20kg here," says the man who owns it. He is young - late 20s maybe - dressed in skinny jeans, a tight top and trainers. And he is one of thousands making money from the cannabis boom.

In Albania, a kilo of this illegal drug sells for between 100 and 200 euros (£85 to £170). In Italy it will fetch about 1,500 euros. And most of the country's cannabis crop is trafficked out - north through Montenegro, south to Greece, or west across the Adriatic to Italy. There is no significant home market. One source estimates the illicit industry may be worth five billion euros (£4.25bn) per year - about half of Albania's GDP.
The 20kg of stinking greenery slowly drying in the sunlight that streams through an open window does not represent this man's entire crop.
"I've produced 350kg," he says. "This year almost every single house in the village grew cannabis - tons and tons have been produced in this community alone."
This man employs 15 people to pick and process, and armed guards to defend his crop. He says he is in charge here, but he probably belongs to a wider network. So if everyone is growing it, and that seems to be common knowledge, why has there been no police raid?
"I pay the police 20%. Everybody has to pay. If you don't pay they will take you to jail," he says.
Then, he gets defensive.
"This is our curse - there are no jobs, no work here. There's no money in growing anything else. I know it's not a good thing I'm doing, but there's no other way."

For decades Albanians lived under a punishing, closed regime. Then, after communism fell, came a period marked by civil unrest and the rapid growth of organised crime. Twenty-five years later, unemployment is still high and corruption rife - conditions that enable the cannabis trade to flourish.
The government has had some success in its fight against the illegal industry.
It says more than two million cannabis plants have been destroyed this year, and now that the growing season is over, police are concentrating on confiscating the drug as it is prepared for trafficking out of Albania.
Some of the hauls have been huge.
In a vast warehouse in the town of Rreshen, tucked into the foothills of the mountains north of Tirana, tier after tier of drying cannabis is laid out on mesh shelves. On the concrete floor, there are more waist-high mounds of the drug. Sacks of it lie around, and it spills out of the open back doors of a transit van.

In the middle of this sea of weed - his woolly hat pulled low, his glasses on the end of his nose, and a gun at his hip - is the police officer in charge, Agron Cullhaj, who describes it as the largest ever find in this area.

If you compare figures for 2015 and 2016, they reveal a five-fold increase in the area cultivated with cannabis

In this one location there are more than four tonnes of cannabis, with a street value in Italy of some six million euros (£5m).
"When I took office in 2013, I started to plan huge action against the illegal cultivation of cannabis," says the Home Minister, Saimir Tahiri.
In their mission to rid Albania of the cannabis scourge, the government has the support of the Italians. The Guardia di Finanza pays for aerial surveillance to identify plantations, and it is their statistics that Albanian politicians quote.
"From 2013 to 2016, the figures show more than a 30% decrease in the area of Albania cultivated with cannabis. That means we're on the right path," says Tahiri.
The 30% decrease came about largely because a mammoth police operation in 2014 destroyed the well-entrenched cannabis industry in Lazarat, a southern village once notorious as the drug capital of Europe. In the raid - employing firepower, special forces and armoured vehicles - many tonnes of cannabis were seized and thousands of plants destroyed.


But if you compare the Italians' figures for 2015 and 2016, they reveal a five-fold increase in the area cultivated with cannabis. Sources within Albania suggest many communities have turned to drug production for the first time this year.
Corruption is critical to the success of this illicit business - something the Home Minister recognises.
"For sure police have been corrupted," he says. "Since my first day in office, more than 3,000 police officers are under criminal or disciplinary investigations. That's nearly 20% of the whole troop."
Not all of those officers have been fingered over cannabis, though. Corruption in Albania bleeds into so many cracks of everyday life.

Listen to Albania's cannabis boom on BBC Radio 4's Crossing Continents at 11:00 on Thursday 1 December - or catch up later on the BBC iPlayer
The programme can also be heard on Assignment on the BBC World Service

Another reason the cannabis trade is hard to stub out is that it pays well - about 20 euros (£17) a day in some places.
"As a waiter I got paid only a third of what I earned with cannabis," says a 20-year-old, whose parents stopped him going to work when they found out what he was doing.
He lives on the outskirts of Tirana, in a suburb that rural families migrated to when the communist edifice collapsed in the early 1990s. They came looking for work, but more than two decades later it is still hard to find regular, legal employment. Weed has filled a gap.
"At 4am you see crowds of people outside going to work," says the young man. "The streets are full - women, men, young people - even children…"
Fleets of minivans carry workers out to the countryside. In the growing season they labour in the plantations. After the harvest, they prepare and pack the drug ready for its illicit export.
Critics say it's these daily workers who are most likely to be caught in police raids, while the big fish escape. And that even if someone connected to organised crime is picked up, there are few prosecutions on serious charges, such as membership of a criminal network.

The minister, Saimir Tahiri, says that is not true.
"We haven't chosen to go after villagers who plant small areas to kill their poverty. We go after those who, in our analysis, are 'big fish'. We have nearly 1,600 ongoing criminal proceedings, and we've made more than 400 arrests, which shows we're going after those who finance, organise and gain profit from this business."
There is widespread concern in many quarters in Albania about the wider impact of cannabis production, and how young people - ambitious and impatient for a better life - can be persuaded not to get involved.
"There are too many young people in prison. I think they are victims," says Catholic priest, Father Gjergj Meta.
"Many of them - men and women - are convinced they can make a lot of money. So the cultivation of cannabis doesn't give us a culture of work. People are desperate. They don't see a future."
Father Gjergj penned a letter that was published online, and went viral in Albania. He addressed it to an imaginary youth.
"You may not be able to read this letter," he wrote. "Perhaps you're guarding cannabis in a field, processing it, carrying it in sacks, or maybe you're even in jail…" Then in beautiful prose he described how Albania's troubled history - communism, the cult of strong men, and organised crime - has reduced opportunity. The letter ends with an appeal to young people to turn their backs on the cannabis fields.
With few alternatives, it is a plea that may well fall on deaf ears.