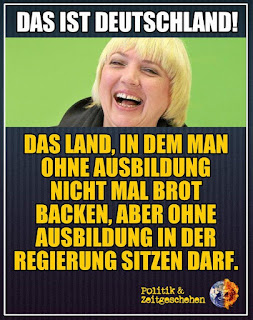 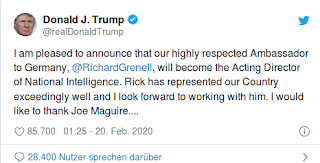 It would seem rather surprising therefore that a mouthy maverick who has also worked as a Fox News pundit is now being given the top US intelligence portfolio.

Grenell, who has been the U.S. envoy to Berlin since May 2018, is known to be fiercely loyal to Trump, but critics have noted that he has no background in intelligence and no top-level management experience.


Grenell replaces the current acting director of national intelligence, Joseph Maguire. Maguire replaced Dan Coats, who was ousted by President Trump in July, just as events surrounding what would become the Ukraine scandal were brewing.

Like Maguire, whose term is up on March 11, as an acting director Grenell will be limited by law to serving for 210 days.

The president has shown a preference in many cases for "acting" Cabinet members who do not require Senate confirmation and have time-limited tenures.


However, Maguire likely attracted the ire of administration officials by testifying before the House Intelligence Committee during its Ukraine probe. In September, he told the committee that he believed the Ukraine whistleblower "did the right thing" and that the intelligence community's inspector general — whose report helped trigger Trump's impeachment – acted in good faith.

Grenell — who is openly gay and announced last year that he would lead a global campaign to decriminalize homosexuality — was appointed in 2001 as U.N. spokesman by President George W. Bush and held the position for the next seven years, serving four ambassadors.

He later became a Fox News contributor on foreign affairs and the media, and briefly a foreign policy spokesman for Mitt Romney's 2012 presidential campaign. He resigned, citing "hyper-partisan discussion of personal issues" as the cause. At the time, his sexual orientation was rumored to be the cause of friction within Republican circles.

In addition to being ambassador to Germany, Europe's largest economy, Grenell has served as the Trump administration's special envoy for Serbia and Kosovo. Link
Eingestellt von navy um 15:08