The incident with the Albanian flag, the Greek minister apologizes

He has provided minister Panariti that his visit to Greece has had a huge impact and positive and has requested that telephone conversation becomes official and public apology be, reports "Ora News TV".

While the Greek Embassy in Tirana is expected to present an official apology today at the Ministry of Foreign Affairs of Albania.

Albanian flag was upside down during yesterday's press conference with the two foreign ministers, Albania Edmond Panariti and that Greece Dimitris Avramopoulos.. 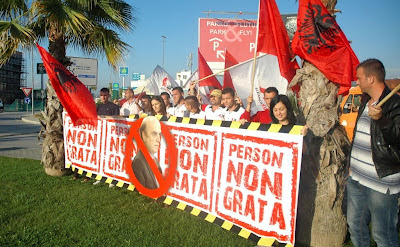 The Read and Black alliance, blocking the arrival of Edmont Panariti in Tirana airport

'In the early morning hours of Friday, Red and Black Alliance activists blocked the exit of foreign minister, Edmond Panariti, from the airport "Mother Teresa" after his arrival from official visits to Athens. By calling and whistling against the humiliation of national symbols and not timid response Panariti Minister, Red and Black Alliance activists blocked the emergence of the sector minister "VIP" Airport "Mother Teresa" and opened the banner "Edmond Panariti - person 'non grata '"in Albania.Connected side by side with each other Red and Black Alliance activists tried to not let him down in the Albanian territory minister Panariti, in protest against the Albanian government negotiations with the Greek government for the deal of water, but also for the scandal with the Albanian flag in conference joint press conference with his counterpart, Avramopoulos.

Red and Black Alliance Organizing Secretary, Redi Ramaj, during the joint press statement issued harsh messages against maritime agreement renegotiation between Albania and Greece, and demanded to be made public by any means the minutes of secret talks Panariti Avramopoulos."Minister Panariti subdued Albanian national flag and historical symbols. The emergence of diplomacy in violation of our national symbols with their counterparts in Athens, Skopje and Podgorica is not a technical or human error, but a diplomatic message kneeling and capitulation anti government last 100 years, "said Redi Ramaj.

"We demand that the Albanian government to stop any kind of negotiations and communication with the government Greek Ionian sharing. Red and Black Alliance warns citizen Berisha and Cyprinus that the signing of this agreement is a criminal offense and the filing of the Albanian territory in favor of the Greek state is punishable by life imprisonment, "said Ramaj."Red and Black Alliance and all the Albanians with integrity have a clear message to the Minister of Foreign Affairs knees Albania Edmond Panariti, he is an unwanted person on Albanian soil," said Redi Ramaj.Red and Black Alliance Constitutional Court's decision on water agreement with Greece is the hallmark of the law on an affair anti-national and anti-Albanian initiated by citizen Sali Berisha.After protesters blocked the road, the minister moved from the old road Rinas.
Eingestellt von navy um 03:37