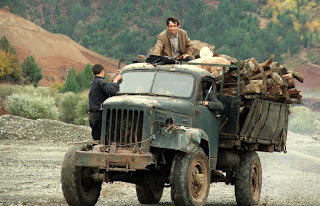 The Associated Press
Albania's Finance Ministry said Thursday it would borrow €250 million ($313.6 million) from Deutsche Bank and Greece's Alpha Bank to fund its budget deficit. The two banks were selected after an international tender with seven bidders, the ministry said in a statement.

It gave no details for the loan, which is expected to fund the budget deficit and the construction of a new highway to neighboring Kosovo. Albania's 2009 budget deficit is projected at 4.2 percent of gross domestic product.
Last year, the government also took a €230 million loan to cover its budget deficit

TIRANA, Albania -- Albania obtained its first ever sovereign ratings -- a "B1" for its debt obligations and a "Ba1" country rating for its foreign-currency bonds -- from Moody's Investors Service on Friday (June 29th). According to an official press release from Moody's, the ratings reflected Albania's transition from "an isolated, administered economy" to a market economy. (Albanian News - 30/06/07; Dow Jones - 29/06/07)

The country now plans to finance part of its national debt through foreign loans.


The IMF will help supervise the borrowing process. [Getty Images]

Albania is making the transition from an isolated, administered economy to a market one, according to Moody's Investor's Service. Earlier this summer, the international ratings agency gave the country its first-ever sovereign ratings -- Ba1 for foreign-currency bonds and a B1 for the government's debt obligations.

Ardian Fullani
Ardian Fullani
The governor of the Bank of Albania, Ardian Fullani, warned on Friday that 2009 will be a difficult year for Albania’s economy, due to the recession that has hit global markets.

“Although the banking system will continue to be profitable, the coming year will be full of unknowns,” Fullani said in a meeting with the bankers' association. "It would be foolish to think that our economy would be affected only slightly by the global downturn.”

Albania's state statistics agency announced a record-high GDP growth of 9.9 percent in the last four quarters ending September 30, but the accuracy of its data is widely disputed by economists.

Albanian banks will not suffer from international crisis, IMF says

TIRANA, Albania -- The International Monetary Fund (IMF) assured observers on Thursday (October 9th) that Albanian banks would not suffer ill effects from the ongoing international financial crisis, as Albania's banking sector lacked integration with the world economy, IMF representative in Tirana Ann-Margret Westin said. "It is a fact that banks in Albania are not exposed to the so-called 'toxic' financial instruments that have been the source of the crisis," Westin noted. She advised the government to follow careful fiscal policies to guarantee investors it is capable of maintaining macro-economic stability. (Shqip, Panorama - 10/10/08; Top Channel, Top News - 09/10/0cool