We think this story is huge. Finally some people might begin to really understand the scope of organized crime.

"Kosovo is just a multi-crimininal, poli-functional space. And this space is being used by Washington and by Europe for two things. Mainly it creates a highly criminal mafia environment for terror management. There have been, including Osama bin Laden, many known terrorists flown by American help into this area, and this is a training ground unto today for al Qaeda actions. And that is what Kosovo is needed for." ~ Christof Hoerstel @ 4:00 in the following Russia Today video


The important point to understand, made crystal clear by Aangirfan, is that SOLDIERS KEEP THE GANGSTERS IN POWER.

It is very important in particular to note the importance of EVIDENCE, or LACK OF EVIDENCE. We have noted this many times, how people demand PROOF of various allegations.

Deliberate Destrution of Evidence – Long dismissed in the mainstream media as “Serbian propaganda,” the allegations of organ trafficking – familiar to our readers – were ignored in the West until early 2008, when Carla Del Ponte, former Prosecutor at the International Tribunal for the Former Yugoslavia (ICTY) at The Hague, revealed in her memoirs that she had been prevented from initiating any serious investigation into its merits. She also revealed – shockingly – that some elements of proof taken by ICTY field investigators from the notorious “Yellow House” in the Albanian town of Rripe were destroyed at The Hague, thus enabling the KLA and their Western enablers to claim that “there was no evidence” for the organ trafficking allegations.

How easy is it to make the evidence go away? It's very easy when organized crime has at it's service the military, the media, and people highly placed in governments and bodies throughout the world.


U.S. Damage Limitation and Self-Censorship – Such commentary is light years away from the feeble and half-hearted reporting in the American mainstream media. The Chicago Tribune, for instance, did not deem it fit to publish a story about the Council of Europe report itself. It published two related items critical of the report instead, on the European Union expressing doubt about its factual basis and on the “government” of Kosovo planning to sue Dick Marty for libel. No major daily has published a word of doubt about Bill Clinton’s wisdom of waging a war on behalf of Thaçi and his cohorts a decade ago, or perpetuating the myth of it having been a good war today.

That Thaçi aka “The Snake” is a criminal as well as a war criminal is no news, of course. The intriguing question is who, on the European side, wanted to end his “untouchable” status, why now, and what is the U.S. Government – his principal enabler and abettor – going to do about it.

Unsurprisingly, Thaçi’s “government” dismissed the report on December 14 as “baseless and defamatory.” On that same day Hashim Thaçi wrote in a telegram to President Obama that “the death of Richard Holbrooke is a loss of a friend.” “The Snake” has many other friends in Washington, however, people like US senator (and current foe of WikiLeaks) Joseph Lieberman, who declared back in 1999 at the height of the US-led war against the Serbs that “the United States of America and the Kosovo Liberation Army stand for the same human values and principles … Fighting for the KLA is fighting for human rights and American values.” Thaçi’s photos with top U.S. officials are a virtual Who’s Who of successive Administrations over the past 12 years: Bill and Hillary Clinton, Albright, Bush, Rice, Biden, Wesley Clark….....

Here Thaci sits with Tony Blair in 1999. So happy and relaxed! What could they be laughing about? 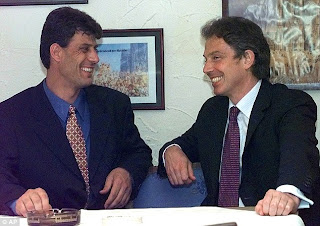 Discussing traffic?
"All smiles: Tony Blair meets Thaci in 1999 when he was the leader of the KLA and according to yesterday's report, when the organ-ring had just started. The pair posed for photos in a bar near where the European Union summit was being held in Cologne, Germany." Daily Mail
..............
from http://twelfthbough.blogspot.com/2010/12/exposure.html

It has taken more than two years for an inquiry into organ trafficking in Kosovo to reach the Palace of Europe, a grand building in Strasbourg that serves as the headquarters of the Council of Europe. The formal inquiry into organ trafficking in Kosovo was prompted by revelations by the former chief war crimes prosecutor at The Hague, Carla Del Ponte, who said she had been prevented from properly investigating alleged atrocities committed by the Kosovo Liberation Army. Her most shocking disclosure – unconfirmed reports the KLA killed captives for their organs – prompted the formal inquiry by human rights rapporteur Dick Marty. His report, published last month, suggested there was evidence that KLA commanders smuggled captives across the border into Kosovo and harvested the organs of a "handful" of Serbs. His findings, which will be subject to a parliamentary assembly vote tomorrow, went further, accusing Kosovo's prime minister and several other senior figures of involvement in organised crime over the last decade.
http://www.guardian.co.uk/world/2011/jan/24