The german - us desaster: Eulex in Kosovo: a shining symbol of incompetence

Should EULEX be abolished?

Last Thursday I attended a lecture by Johan van Vreeswijk who until last July was an EULEX prosecutor. As he made some fame as a crime fighter in Kosovo I had expected to hear a lot about how the rule of law is strengthened in Kosovo.

Instead he spent nearly the whole lecture defending the present escapades of EULEX and KFOR in the North of Kosovo. Unfortunately he is no expert in international law and that showed. On criminal law - his expertise - he was very short: he expressed great confidence in his Albanian colleagues. It took a question from the public to have him say something about the Limaj case and then he only said that it took regrettably long due to dysfunction in the EULEX organization.

Obviously if the Albanians are doing so well it raises the question whether EULEX is still needed. My gut feeling was that EULEX is a complete failure and that they are now behaving like a third rate Balkan politician who has failed to improve the life of his voters and now uses nationalism as a cheap way to appear useful anyway.

Eulex in Kosovo: a shining symbol of incompetence
The costly EU mission in Kosovo has betrayed its mandate – it must be audited and reformed

................
Eulex, seized by panic over its obligation to act on these allegations, at first said that it knew nothing of them, and challenged Marty to show his evidence. Only when pressed hard by Marty, Brussels and the foreign media did Eulex announce an investigation into the matter.

However, when asked whether Thaci (named 26 times in the report) was being investigated, Eulex officials immediately backtracked by saying that no "formal" investigation had been opened. These confused statements were used by Thaci to pronounce himself innocent and to decry the fecklessness of the EU mission: with sublime, if perhaps unintended, irony he repeatedly resisted proposals to transfer the investigation from Eulex to an ad hoc international body.

Eulex has become a symbol of incompetence, not of European values, and a costly veil that hides the shenanigans of the elite from the eyes of Kosovo's citizens.
................
http://www.guardian.co.uk/commentisfree/2011/apr/09/eulex-kosovo-eu-mission 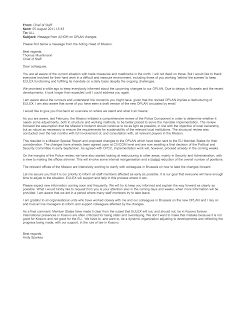 During the current situation in north Mitrovica, two chief players under UNSCR 1244 have been strangely absent: UNMIK and EULEX. Seems they were simply pushed aside by the US, which then used KFOR to go off making political agreements and enforcing customs controls outside the UN mandate. However much KFOR tries to hide behind its “security” role, its behavior stands out as clearly beyond 1244 and therefore illegal under international law. But as has been the case for many years now, the US can still act as the world's remaining superpower, in Kosovo if no where else.

So where was the UN? Secretary General Ban Ki-Moon did his part by making clear that the United Nations “is committed to doing everything possible to help to maintain calm” and calling on everyone to “ensure a peaceful resolution of issues in conformity with Security Council resolution 1244 (1999).” But back in Kosovo, UNMIK did little but express its “concern” on July 26. Apparently, in the midst of the crisis, UNMIK HQ had to order senior staff to stay at their posts rather than take a long Ramadan-weekend holiday. But who could blame the staff, their leadership was apparently uninvolved and unconcerned as KFOR took the 1244 mandate and ran off the field with it. I asked UNMIK for comment on whether it retains responsibility for Kosovo under UNSCR 1244? About KFOR's actions in northern Kosovo and especially its enforcement of an embargo of goods at the two Gates? If KFOR's actions are consistent with 1244? If KFOR's responsibility for security extends to blocking non-lethal commercial goods? Was UNMIK consulted by KFOR before or during its "negotiations?" So far no comment, not even to repeat the quote from the Secretary General.
.......................
http://outsidewalls.blogspot.com/2011/08/


Ex-NATO Chef: Lord Roberston: “the KLA were responsible for more deaths in Kosovo than the Yugoslav [Serb] authorities had been.”

Kosovo: a template for disaster
The idea that Kosovo is a model for humanitarian intervention in Libya is based on a series of myths
.......................
http://www.guardian.co.uk/commentisfree/2011/mar/21/kosovo-template-for-disaster-libya

And in its 2005 situation report, the Council of Europe said:
“Ethnic Albanian criminal groups are reportedly responsible for a large part of the wholesale distribution of heroin in Europe… Ethnic Albanian criminal groups pose a significant threat to the EU because of their involvement in drug trafficking, THB [trafficking in human beings] and money laundering.”
“Ethnic Albanian Criminal Groups” are the only national group discussed in the 2006 Europol [European department of Interpol] publication The Threat from Organized Crime:
“Ethnic Albanian organized crime groups have established themselves in many European Union Member States and beyond… ethnic Albanian crime groups are found to extend their role from facilitators to achieving full control in certain crime areas. They adapt without difficulties to local or changing situations.”
No “Freedom Fighters”, Just Criminals and Thugs
On the preceding pages, the latest Drugs & Crime UN report offers a rarely accurate analysis of the situation among the ethnic Albanians (both next door to Serbia, in neighboring Albania, and in Serbia itself, mainly in the southern Kosovo province), which led to formation of the Albanian terrorist KLA (UCK) and to the terrorist attacks in Serbia — an unusually honest glimpse at the root-causes of Albanian insurrection and occupation of part of Serbia, impossible to find in the tons of worthless junk produced daily by the Western mainstream media.
The following excerpt effectively dismantles the pompous claims of heroic “struggle for freedom and independence” and disingenuous references to the “self-determination” of an ethnic group which has already exercised its right to self-determination with the formation of state of Albania.
No, it has nothing to do with “freedom”, “independence” or “self-determination”, it is all about illicit trade, crime without punishment, lawlessness, thuggery and insatiable greed.
Criminals, Terrorists or Politicians? In Kosovo-Metohija, all Three.
Excerpt from the UN Office on Drugs and Crime report for March 2008
[pg 52] According to an Interpol statement made before the U.S. Congress in 2000:
http://www.unodc.org/documents/data-and-analysis/Balkan_study.pdf