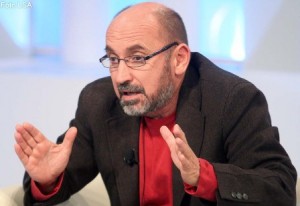 Fatos Lubonja: "I do not feel anything for the Albanian national anthem"

Lubonja: The "Red and Black Alliance, has the goals only for politics under the nationalism sllogans, attaking Greece and Serbia for politic electorate in future"

Fatos Lubonja, as has been in the show, the TV "Klan" "Opinion", where topics for discussion was "Are Albanians patriots today?", Has issued several statements that exceed the critical attitude towards nationalism. Thus, he claimed that feels nothing when he hears the Albanian national anthem.

"I'm not patriotic, not nationalist. Even when I hear the anthem, not stand or walk and that strikes me. Even all the anthems of other countries are based on ideologies that do crimes and kill people under the calls of nationalism. Just did Stalin, Hitler and Enver Hoxha, "said Lubonja.

Further, as stated the other times, Lubonja has shown disdain toward the figure of Scanderbeg, and said that is primary to be an honest citizen, that works well, and a aktivst of human rights.
Lubonja said aslso in his opponion that The "Red and Black Alliance, has the goals only for politics under the nationalism sllogans, attaking Greece and Serbia for politic electorate in future"
Einfach nur peinlich, die Ausführungen des Null Funktion Kresniq Spahiu! Als Amts Träger Nichts zustande gebracht, nur Geschwätz!