Criminal gangs in Tirana, Albania are selling counterfeit identity documents
For £800, this paper bought a counterfeit Italian ID document from an Albanian forger that could be accepted in place of a passport at British border control.
For another £250 we got an Italian state health card which also allows immigrants access to some NHS services. 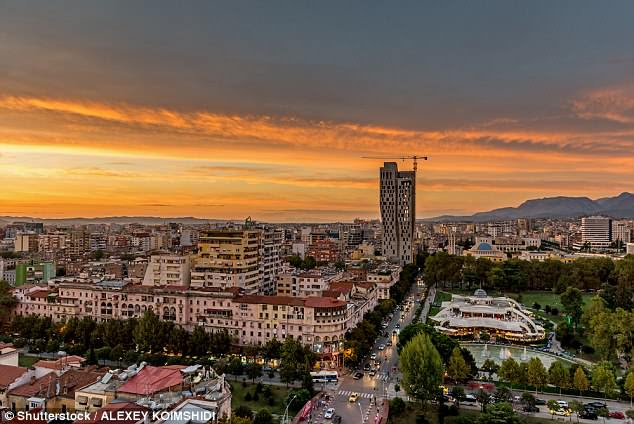 +1
Criminal gangs in Tirana, Albania, file photograph, are supplying illegal migrants with bogus travel documents and health insurance cards which can be used to secure NHS services
The Mail investigation comes amid growing concern about the proliferation of fake European IDs, which have been used by jihadis, rapists, thieves and benefit fraudsters.
Albanian Fatmira Tafa was jailed for 14 months in April for using a fake Greek ID to get a kidney transplant that cost the NHS more than £72,000.
And Islamic State terrorists behind the Paris and Brussels atrocities also used ‘top quality’ counterfeit EU ID cards to travel freely around the continent planning their carnage. Najim Laachraoui, one of the March 2016 Brussels Airport suicide bombers who killed 32 people, had an ID card produced by a Belgium counterfeit documents factory. He was also involved in making explosives for the suicide vests worn by fellow jihadis in the November 2015 attacks in Paris which killed 130 people.
The EU border agency Frontex said more than 7,000 people were detected trying to enter the bloc using fraudulent documents in 2016 – with most found trying to get into the UK. Albanian and Ukrainian nationals using fake Italian and Greek ID cards are the main offenders caught at UK borders.
‘Smugglers frequently provide migrants with fraudulent travel and identity documents as a part of their “services”,’ Frontex said last year in its annual report.
‘Both the quantity and the quality of the fraudulent documents circulating in the EU have improved over recent years. The sustained demand has prompted counterfeiters to increase their output and has also prompted the creation of new print shops.’
Europol, the European police agency, has warned that document fraud is one of the most common criminal activities linked to the migration crisis.
In the Albanian capital Tirana, our reporter made contact with a forger via an intermediary, and within 72 hours were able to obtain a fake Italian ID card. We supplied a picture, but the name alongside the photo was a real Italian woman. Her place of birth was given as Monza, near Milan, with details believed to have been plundered from the Italian citizens’ register.
We were also offered an Italian health card called the Tessera Sanitaria in the same name with a 16-digit ID number that allows the user to open a bank account and get state-subsidised medical treatment once inside Italy, and some access to the NHS if presented in the UK. Thousands of Albanians have used counterfeit documents to get into the UK in recent years, the country’s police chief has said. A police source said: ‘The documents are tried and tested. People who get through get in touch with friends and relatives and tell them about it, so new clients can be confident they will work when they buy them. That is why the business works.’
Currently anyone can enter the UK with either a passport or an ID card issued by all countries within the European Economic Area – which includes all EU countries plus Iceland, Liechtenstein and Norway.
In the 2017 report, Frontex warned: ‘The provision of fraudulent documents will continue to represent a serious threat to the security of the EU.’ Tory MP Tim Loughton, a member of the Commons home affairs select committee, said airport staff had warned him the use of forged passports and IDs had doubled in recent years. ‘It’s a growing problem and the fakes are getting increasingly sophisticated,’ he said.
Immigration minister Caroline Nokes said: ‘We have teams of expert forgery officers across the UK to prevent the holders of fraudulent documents from entering the country. Between 2010 and March 2018, we denied entry to over 144,000 people.’  http://www.dailymail.co.uk/news/article-5889915/Forged-EU-identity-cards-used-enter-UK-illegally-order-just-THREE-DAYS.html?ITO=1490http://www.dailymail.co.uk/news/article-5889915/Forged-EU-identity-cards-used-enter-UK-illegally-order-just-THREE-DAYS.html?ITO=1490
Eingestellt von navy um 07:29