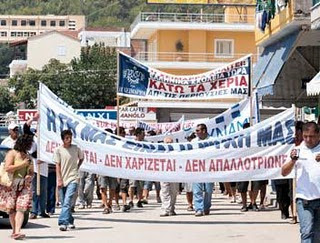 The Coast line and The Himara Community Association, to protest property in Tirana they reminded Albanian politics and government, that without the return of all property, including community property and the Orthodox Church, any step can not unite Albania with EU values​​. Chairman of the Coast Line Association, Niko Nesturi, 7501 stated that the law is stated as civil disobedience and that the OSCE would ask to have full transparency for coastal zone management. While from Himara Community, Prof Priamo Bollano, stated about the Constitutional Law of the properties that Albania ... mehr 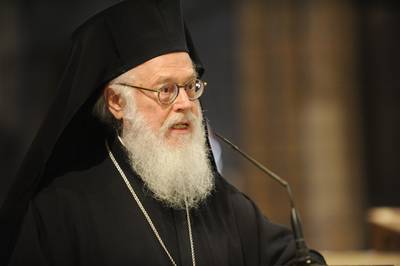 Archbishop Janullatos expected to visit Dhermi, in occasion of  the day of St Mary

The Pastor of Dhermi, and representatives of "Omonia", the main actors of robbery that property, in the time it was, the village council secretary

Archbishop of Durres and Tirana and all Albania, Prof. Dr Anastasios, will visit Dhermi, on the occasion of Saint Mary, next week, sources close said from the Orthodox Church.

The visit coincides with Saint Marry day, where a ceremony will be held in Saint Theodore Monastir, but thought that significance might be great, the fact that the Orthodox Church, as great owner of the land in the Himara Region, has accused high exponents of "Omonia" the Greek Minority representation, that they have collaborated with the Albanian mafia, to sell and build hotels on church properties.

But the biggest charges, shown a year ago by the Metropolitan of Argjirokaster, Demetrios, is the target to the Representatives of the church itself, in which the actualy priest of the Himara Region, has been secretary of the village Council of Dhermi, in which he has signed, the sale of church lands and properties.

Meanwhile, sources in Dhermi, say, just this month, are sold three hotels with permission granted by the representatives of "Omonia" and former chairman of the Himara Municipality, Vasil Bolanos, to the Albanian mafia..
Eingestellt von navy um 11:52