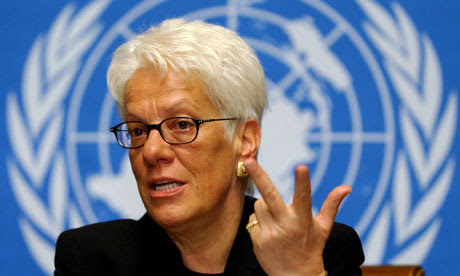 Carla Del Ponte, the former chief prosecutor at the International Criminal Tribunal for the former Yugoslavia. Photograph: Laurent Gillieron/AP
Carla Del Ponte, the former war crimes prosecutor who put Balkan warlords and political leaders behind bars, is to be investigated over claims she allowed the use of bullying and bribing of witnesses, or tainted evidence.
Judges at the UN war crimes tribunal for the former Yugoslavia in The Hague today ordered an independent inquiry into the practices of Del Ponte and two prominent serving prosecutors, Hildegard Ürtz-Retzlaff and Daniel Saxon, after complaints from witnesses that they had been harassed, paid, mistreated and their evidence tampered with.
It is the first time in the tribunal's 17 years in operation that top prosecutors have faced potential contempt of court rulings.
During her eight years as chief prosecutor, Del Ponte, a determined Swiss investigator now serving as her country's ambassador to Argentina, was a combative and divisive figure. She left her post in 2007.
The allegations against her concern the working practices of her team of investigators in the ongoing prosecution for war crimes of the Serbian politician, Vojislav Seselj, a notorious warlord.
"Some of the witnesses had referred to pressure and intimidation to which they were subjected by investigators for the prosecution," said a statement from the judge in the Seselj case. "The prosecution allegedly obtained statements illegally, by threatening, intimidating and/or buying [witnesses] off."
One Serbian witness said he was offered a well-paid job in the US in return for testimony favourable to the prosecution.
"The statements mention sleep deprivation during interviews, psychological pressuring, an instance of blackmail (the investigators offered relocation in exchange for the testimony they hoped to obtain), threats (one, for example, about preparing an indictment against a witness if he refused to testify), or even illegal payments of money."
An independent investigator, expected to be a French magistrate, is to report on the allegations within six months. Prosecutors in The Hague rejected the allegations while promising to co-operate with the inquiry.
"We believe our staff have conducted their work in a professional way within the rules," said Frederick Swinnen, special adviser to Serge Brammertz of Belgium, who succeeded Del Ponte as chief prosecutor.
.....................
http://www.guardian.co.uk/law/2010/aug/18/carla-del-ponte-prosecution