RUDARE -- Zubin Potok Mayor Slaviša Ristić says there was no reason for KFOR to shut down administrative line checkpoints in northern Kosovo.

(Tanjug)
The municipal official said the move amounted to blackmail targeting Serbs, after the citizens decided to place barricades on roads leading to the Brnjak and Jarinje posts.
Ristić noted there were no security risks that would justify the closing down of Brnjak, which, unlike Jarinje, never came under attack.

The two checkpoints are used to bring food and medical supplies to the north.
"We have no choice but to persevere in our peaceful, civil resistance. We hope to achieve the goal of not having (ethnic) Albanian customs and border police in the crossings toward (central) Serbia," said the mayer.

He noted the citizens were upset after KFOR commander Erhard Buehler did not rule out the use of force.

But Ristić added that the locals were "not afraid of force".

"We are protesting peacefully and in case KFOR arrives, everyone will gather together and sit on the road."


He also said Zubin Potok was not experiencing major problems regarding the supply of food, but warned that should KFOR insist on keeping the checkpoints closed, there could be shortages in the coming days.

Meanwhile, Kosovska Mitrovica District head Radenko Nedeljković - who, along with municipal presidents in the north has been spending day and night at the barricades in Rudare, near Zvečan - called on the international community and the Kosovo Albanian authorities in Priština to learn from the crisis in the north of the southern Serb province, and realize that unilateral moves cannot solve problems.


He called on the citizens to remain calm and united, adding that there should be no room for panic despite the psychological and propaganda war waged against them on a daily basis.

"Priština is involved in saber-rattling but I am appealing on both the international community and Priština to draw conclusions that force cannot solve problems, and that the citizens have said they do not want to accept the Kosovo institutions. Time and space must be given to talks and negotiations," was his message.

He described the local Serb population as "more determined than ever" to persevere in their demands.

"This is the moment when we are fighting for our very survival," Nedeljković said.

In the northern, mostly Serb part of the ethnically divided town of Kosovska Mitrovica, the local health-care center has called a news conference for Sunday, to explain the problems they are facing after KFOR closed down the checkpoints. There have already been shortages of oxygen, medical material, and some medication, the doctors said.

Meantime in the stores in the town, there have been shortages of bread, milk and other dairy products.

South of the Ibar River, Serbs now live in scattered and isolated enclaves, as most were driven out of their homes by ethnic Albanians in the wake of the 1999 war.

Serbs north of the Ibar remained in their homes and kept their property thanks to their numbers, since they form a majority in that part of the province. They do not accept the ethic Albanian unilateral declaration of independence made in early 2008, and reject the authority of the government in Priština.

The crisis now entering its second week was sparked when the Priština government tried taking over two administrative line checkpoints in the north in order to enforce a ban on goods coming from Serbia, and used police units to do so.
North Kosovo: The Underestimated Conflict at the Heart of the Balkan powder keg 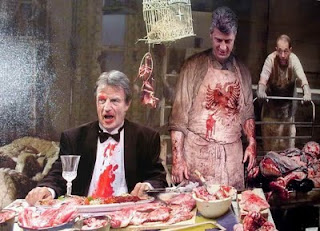 In the wake of international criticism over human rights reports concerning Kosovo province  (‘independent state’ wanna-be) ,  Dick Marty’s report over Human Organ Trafficking was the most shocking of all. Big fish are involved in this horrible atrocity, such as Kosovo’s Prime Minister Hashim Tachi, a former guerrilla leader. Tachi’s inner circle oversaw a KLA gang that murdered and abducted Serbs to sell their kidneys and other body parts on the black market. His KLA- Kosovo Liberation Army, which started as a terrorist organization, ended up ,in the lawless province of Kosovo, as a regular force, revamped into ROSU- special police. This paramilitary terrorist organization is closely linked to Al Qaeda, through a men such as Al Qadi, CIA agent and close acquaintance and money launderer of Osama Bin Laden (ex-CIA agent himself who worked under the code name ‘Tim Osman’ ). KLA helped with founding of Al Qaeda training camps in Kosovo, Bosnia and Raska district for a joint fight against Serbs. Other than that, many of the mujahedeens trained there (quiz question- find the link with Hashim Tachi..) were caught in the USA, while committing terrorist attacks.
One of the big names in Organ Trafficking is also Xhavit Haliti, a former head of logistics for the KLA who is now a close ally of the prime minister and a senior parliamentarian in his ruling PDK party. Highly involved in prostitution, weapons and drugs smuggling, black-listed in many countries, this Albanian serves as political and financial adviser to the P.M. Tachi . One of the lesser known facts about Haliti and Tachi - Haliti is "linked" with the grisly murder of Ali Uka- Ali Uka, a reporter in Tirana, who supported the independence movement but criticized it in print, who was brutally disfigured with a bottle and screwdriver in 1997. His roommate at the time was Hashim Thachi.
"The government of Kosovo continues to support the strengthening of the rule of law in Kosovo, and we look forward to the cooperation of our international partners in ensuring that criminality has no place in Kosovo's development", said the Prime Minister Hashim Tachi, who has been strongly backed by NATO powers.  It is hard to believe that head of a "mafia-like" network responsible for smuggling weapons, drugs and human organs during and after the 1998-99 Kosovo war, will be ready to drop his most profitable industry branch – Human Organ trafficking. Having no regular industry, Kosovo province under the Albanian rule, has no other means of survival and funding US Lobbyists for Kosovo’s ‘independence’.
LINKS: