Greece, is going to grant for 600 thousand  citizenship, for the northern epiriotes

The false data from the Census in Albania, are forcing Athens, to correct errors in its national affairs

The practice of obtaining acceptance by the Greeks in Northern Epirus, will last up to 4 months.


The official estimates of the Census in Albania, apparently, has forced Athens, put in place, going to Plan B to its foreign national policy, to grant citizenship to all Hellenic Community of Northern Epirus (Greek passports) mostly through from three Greek consulates in Albania.
The decision is taken, after Athens, has used all diplomatic sources to have to Tirana, the same wavelength, particularly in geopolitical matters, particularly to give citizenship to Albanians in Kosovo and Skopje by the Albanian Government inside sic months. In his statement, the Greek Interior Ministry, that Tirana, continues to show towards Greece, feeling not sincere cooperation, while simultaneously calling for the right to self-determination of the Greek community in Albania.
Provision for Hellenic Greek citizenship of Albania, is thought be given in a shorter time, which will also be used as self declaration of its community (census of Greeks) in Albania. The approximate number of Greek citizenship in Albania, thought to be around 600 thousand, where only Albanians who have applied, are about 100 thousand.
Giving the tow citizenship for Greeks in Albania, was approved by the Government of Karamanlis on October 2006, but the Greek foreign national Commission, had blocked, since Albania, would hold free census process for the Greek community.
Related: The declarate of the Head of Pan Epiriotic of World Organisation, is made in Occasion of 35 Pan Epiriotic Convention which is making in Boston, USA.

"The albanian Governament does not make the General Counting Population because has afraid about individual declarate in which every albanian citizen must claim his identity. According to Albanian Authorities, the greeks in albania, are 1.17% of total popullation, while the Greek Organisations said for about 25% (togather with vllahes greek Community)

The Greek Governament according to statistics of Prime Minister Venizelos on Peace Concerence in Paris 1919, has declared for about 150 thousand, while seeing acctualy the raise of albanian statistic population makes between 550 to 600 thousand greek who live in Albania and Greece (emigrant). The greek governament it self has the statistics based also to his decision last year for given the greek citizenship to albanian emigrants, who like greek heritage togather with greek omogenes, a total numebr of 700 thousand who live in Greece and Albania (Northern Epirus)

According to CIA factbook in 1989, the ethnik greeks of albania are between 3% (albanian statistics) to 12% (greek organisations) a total population about 3.2 million from census statistics of state dictature. Annwyaw a large orthodoxes in albania (30% albanian population) must declare their old epiriotean origin. 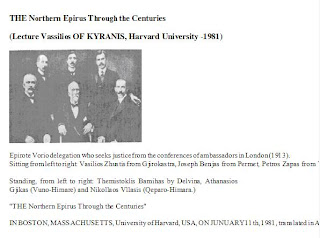 Generals Cham and Orthodox together, were convicted of conspiring to create the autonomy for Northern Epirus The cooperation of the General Teme Sejko, to topple the government of Enver Hoxha, in a lecture at the University of Hawardit in 1981 Vassilios Kyranis, criticizes the official Greek policy, which has helped the dictator Enver Hoxha, to the detriment of the Greek Community The role of Nikita Khrushov to suport the Northern Epirus Authonomy, during his visit in Albania in 1959 In late May and early June of 1959, general secretary of the Communist Party and Prime Min... mehr »
Eingestellt von navy um 08:16