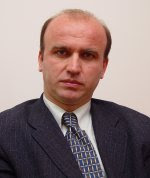 I personally know Damir Fazllic. I think I met him first time on the same day with Sali Berisha, unless the latter was feigning during that first meet in Washington , January 2005. The American company BG&R contracted him as a specialist for Balkans and he would be part of the team for helping PD electoral campaign in 2005. After contract was signed and it was agreed BG and R would stay by the side of PD, Fazllic asked for a contact person in Tirana. KOP (policy orientation committee) had 2 weeks it was created.

Lulzim Basha was not that known during the time. While I had his name on the tip of my tongue to give him as the contact person. Fazllic pronounced it almost like me.- He is the one I need, - he said. Wondered where they knew each other, but I had no bad impression. Like 2 people from Balkan emigrating to Europe and Balkan it was no wonder they knew each other. But BG and R left in July. Damir Fazllic, on the contrary deepened his friendship with Lulzim Basha and his brother-in-law, who for a reason always used to stay two steps backwards or open the car door. In September 2005, during the second week of PD coming into power, they were very clear in their plan. They would make money. Damir Fazllic opened 3 companies within 2 days which always had as administrator Lulzim Basha’s brother-in-law, Erion. He sold the 3 of them later: one in Cyprus and 2 partially to a former Partizani football player of Beograd .

There isn’t much importance on money transfer and fiscal infractions. The worst in all this story is that power moves from Lulzim Basha to Argita and Damir. The advocates she recommends, like Kola or Qeleshi, are the one who wrote the company letters; notary Pustina who works now with Shkelzen is the company notary; Brecani, Berisha’s niece is the company’s accounting expert; Enkelejda Isufi, cousin of Lul Basha brother-in-law is the translator… thus in an endless chain of connections enclosed within a sect which moves from Basha, to Argita and Fazllic flings the whole story of Berisha’s power cupola. By the end of 2005, I had a personal incident with him. Kosovo govt was trying to contract BG and R for lobbying about country’s independence. It was about an amount of $1.5 million. Ibrahim Rugova, who was in his last days of life, couldn’t convince UNMIK for the official payment, while he didn’t accept for underhand payment, like Fazllic proposed. The parties split even inside BG and R. to take control of the situation, Fazllic goes to Beograd and signs an informal agreement with the Serbian deputy Prime Minister, where mentioned that BG and R will lobby for the Serbian govt against Kosovo’s independence. The price was double and terms were lighter.

The other party within BG and R send to me a copy of Fezllic speculation and explained this was not true, but Fazllic was putting pressure on Kosovo’s govt, that if they didn’t sign for the money he would connect to the Serbians. It was hard for Berisha, as a popular person in Kosovo. The nephew Stanisic of was putting pressure on Rugova’s Govt, where he entered with Berisha’s business card.I sent by email to Berisha the contract model of Damir and Serbian deputy Prime Minister. I had no answer. He didn’t open it for three days. All of a sudden the contract was published in Gazeta Shqiptare. I was shocked, as the only person to have it on the email was Sali barisha and me. I asked his secretary about who opened the account profsberisha@albaniaonline.net. She told that only her and any PR consultant. She said possibly Sejamin. I didn’t ask further.

That day in the evening I was in debate on Klan with Edi Rama. It was my first debate with him and I was frightened of getting nervous. The debate started in the most imponderable way to me. Edi Rama was also holding BG and R agreement with Serbia and opened the debate with it. I stopped him untactfully and started explaining it is a fraud. Berisha himself was confused from my explanation and after the debate asked me how “I knew all those things”. I told him I sent him by email, but it ended on Gazeta Shiptare. He never gave an explanation on this, though I understood his discomfort.Two days later I went his office and sent him what could be called “Fazllic“file. There were a pile of writings in the Bosnian and Serbian press accusing him on financial frauds, connections to Legija who killed Gingic but any harebrained person would accuse him either for being a British spy. 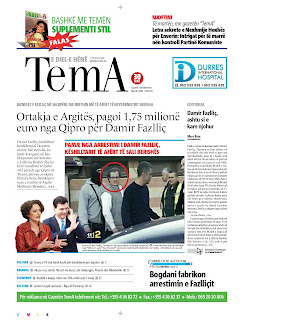