The USS John L. Hall (FFG32) in Conjunction with U.S. European Command Donates Hygiene Supplies to the to the Special Needs Children School, and the Orphanage in Vlora (March 23, 2010)

The USS John L. Hall (FFG 32), and the United States European Command, through the U.S. Embassy’s Office of Defense Cooperation, donated hygiene supplies to the Special Needs Children School and the Orphanage.
This donation was made through Project Handclasp, an ideal vehicle for helping people in need which exemplifies the very best of the US military in communities throughout the world.  The United States Office of Defense Cooperation, working closely with Albanian authorities, has been delivering humanitarian assistance to the Albanian people since 1999.  Other projects have included providing supplies, rebuilding schools and medical facilities, developing water systems, and other non-military projects.

The USS John L. Hall (FFG32) in Conjunction with U.S. European Command Donates Hygiene Supplies to the to the Special Needs Children School, and the Orphanage in Vlora (March 23, 2010)

In a long political crisis in Albania, which was increased after the opposition decided to topple the government Berisha through massive popular protests, in the Bay of Vlora, for the first arrived the U.S. Perry Class frigate FFG32 .

We have no data on that NATO frigate that belongs to the U.S. Sixth Fleet in the Mediterranean, to be case relates to the beginning of mass protests against the Berisha government. But However, reliable sources indicate that an escalation of the protests could lead to a situation of uncertain stability in Albania. 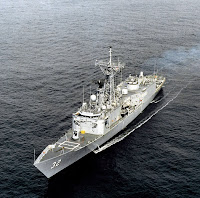 We have been carefully following the discussions in parliament on the Albanian political situation. We regret that, to date, no solution to the current crisis has been reached.

We urge all parties to continue to work within the parliament to resolve their differences through dialogue and compromise. The tone of discussion must focus on finding common ground and not on achieving partisan advantage.

We share the concerns of our OSCE and EU colleagues that the March 18-19 plenary session was unhelpful. Unilateral actions by any party cannot resolve the current stalemate, nor advance this nation’s Euro-Atlantic agenda.