TIRANA, Jan. 27 - Albania's Constitutional Court has annulled an agreement with neighboring Greece on the delineation of the continental shelf and maritime borders in the Ionian Sea between the two countries.

“In the agreement there are procedural and substantive violations of the constitution and of the 1982 UN Convention on the Sea Rights Law,” said the court in a statement.

The decision of the court was unanimous, with all nine judges voting to strike down the agreement.

Albanian social groupings and six opposition parties asked the Court to declare it void due to the lack of transparency. The government had conducted the process before its signing during former Greek Prime Minister Costas Karamanlis' visit to Tirana in April last year.

After filling the required documetnation it was only the Socialist party that formally made the request last November.

The Court had suspended its ratification by the parliament.

The Court considered the deal as "not in line with the Constitution" due to "procedural and substantial violations," according to a statement Wednesday. 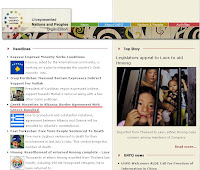 Due to procedural and substantial violations, agreement between Albania and Greece will be annulled by Albania's constitutional court

Albania's Constitutional Court says it has annulled an agreement with neighboring Greece marking out maritime borders and the continental shelf in the Ionian Sea. The agreement was found unconstitutional "due to procedural and substantial violations," a court statement said Wednesday.

The full decision was not immediately available. Six Albanian parties, including the main opposition Socialists, had challenged the April 2009 agreement, accusing the governing Democrats of lack of transparency in negotiations with Athens.

Foreign Minister Ilir Meta said the government would respect the ruling. Relations with Greece have been strained in the past, mostly over the treatment of Albanian immigrants in Greece and of an ethnic Greek minority in Albania.
Eingestellt von navy um 11:30